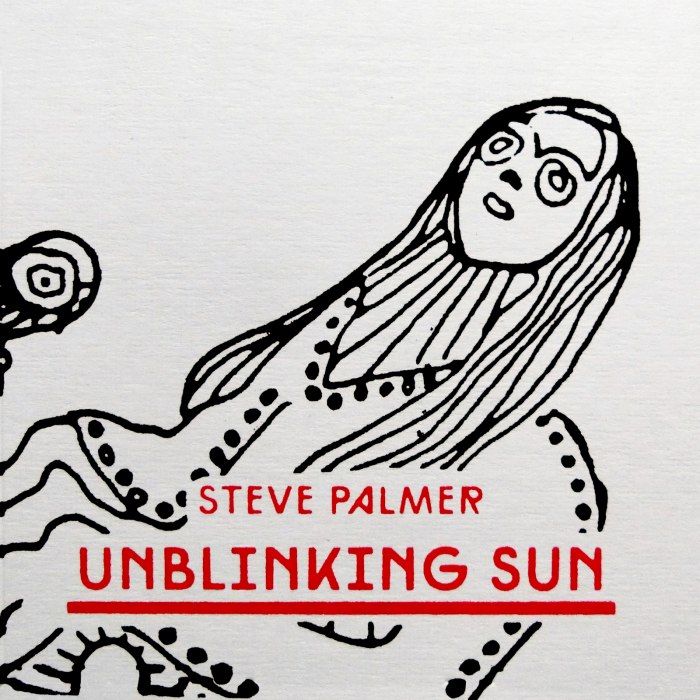 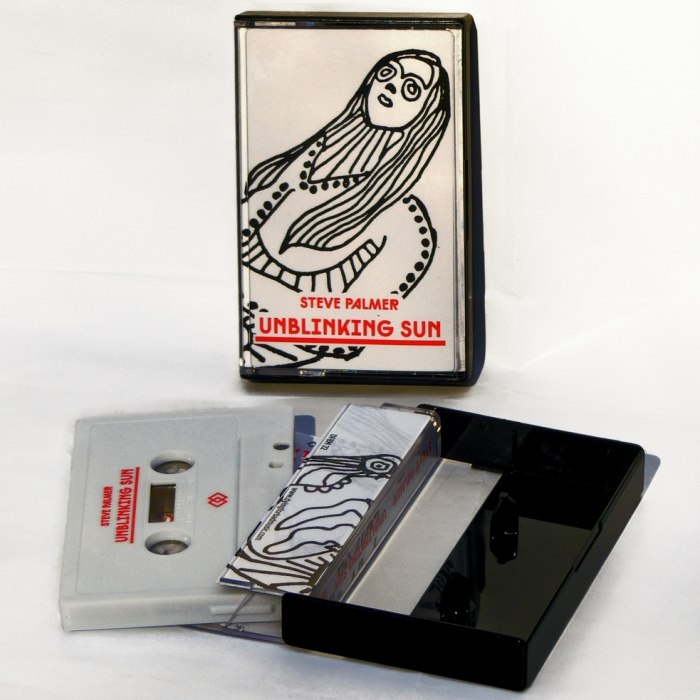 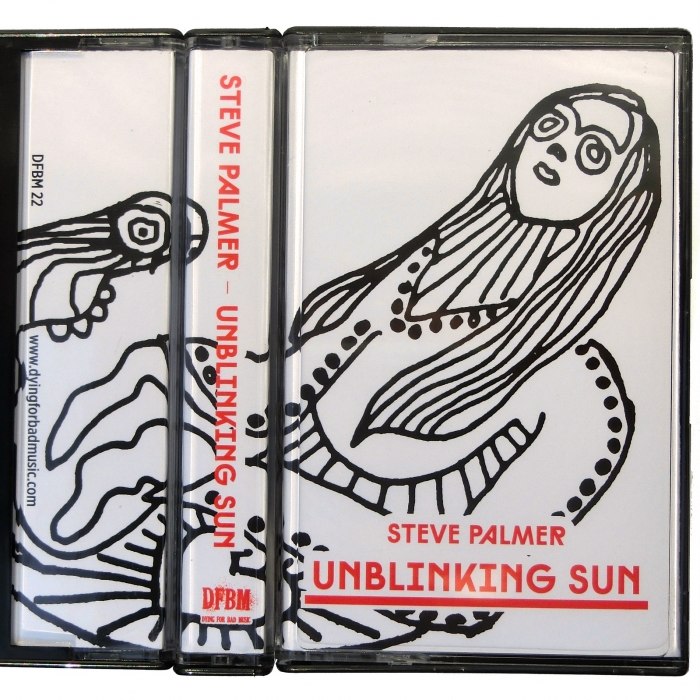 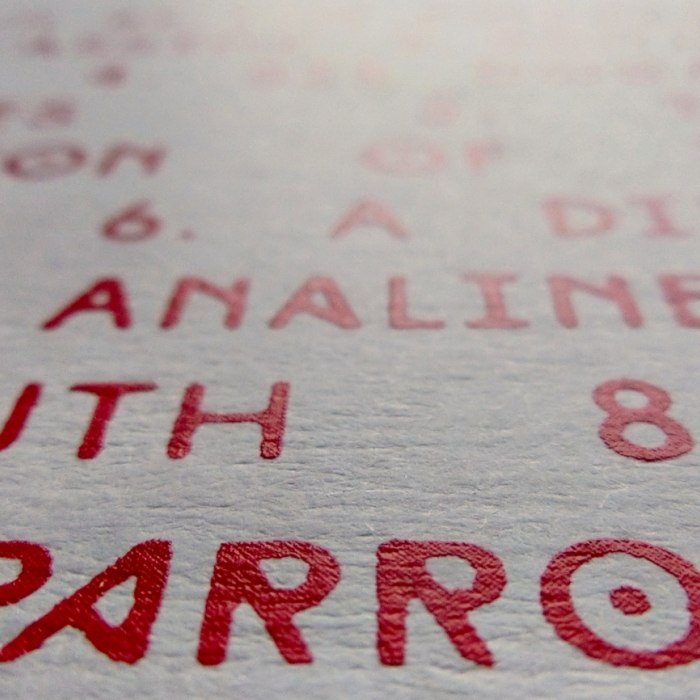 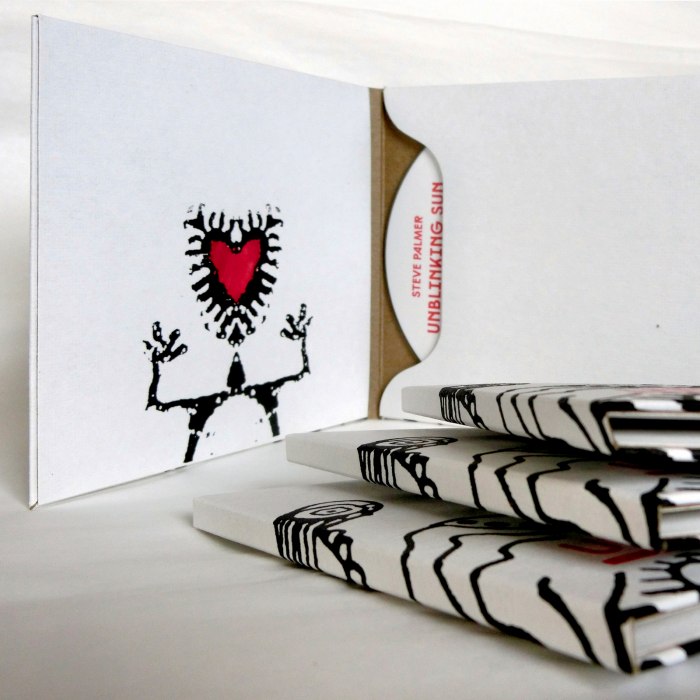 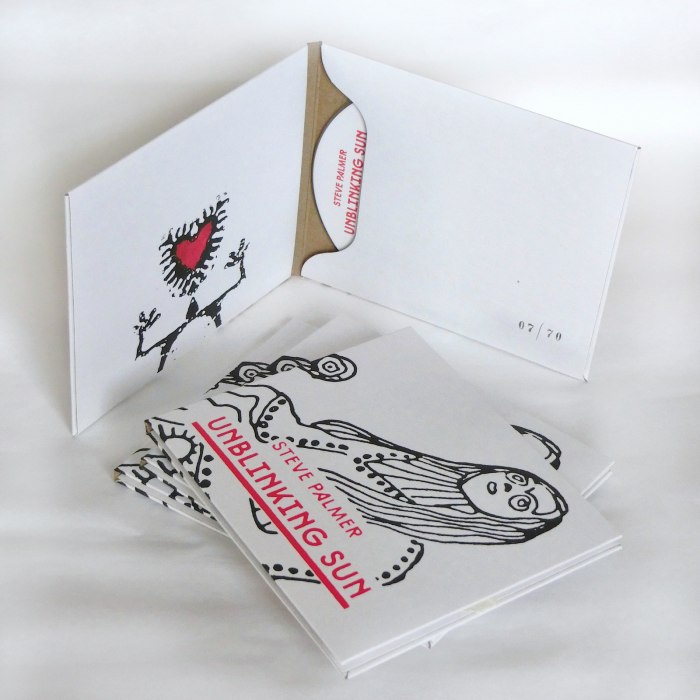 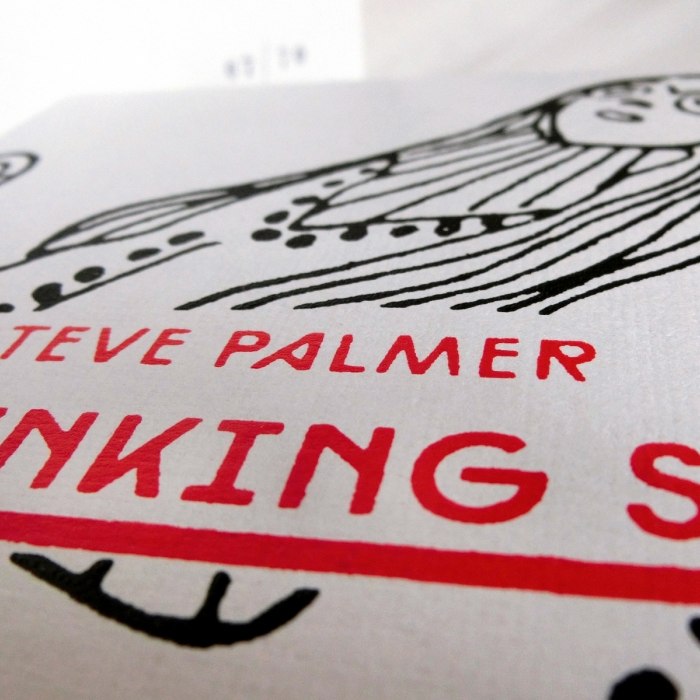 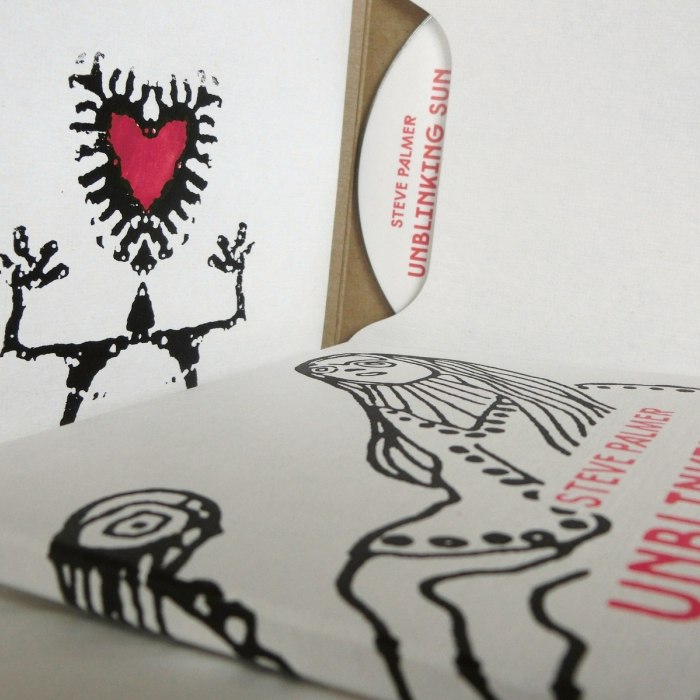 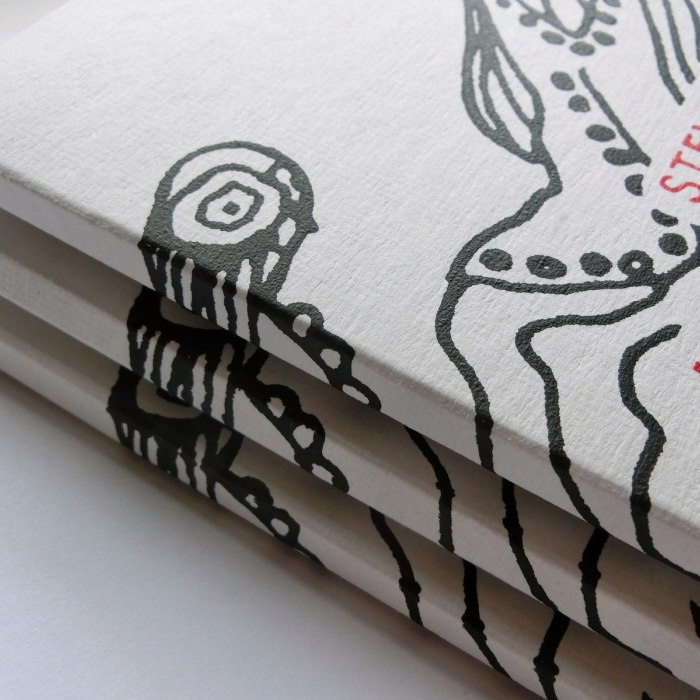 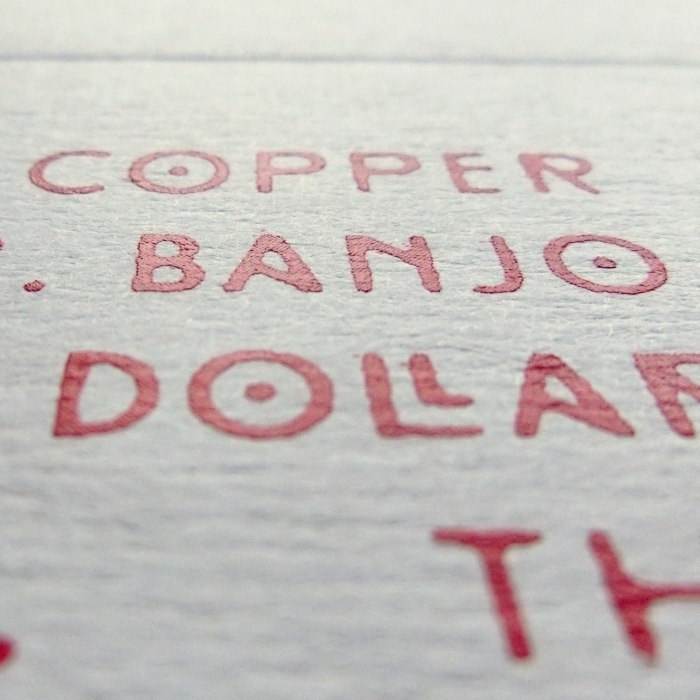 Palmer is a Fahey nut and guitar obsessive. For his full length he explores the experimental side of American Primitivism and even takes the Autobahn to Düsseldorf to get some canned Kraut goods.

Home recordings, 2012-2014, Minneapolis MN
Drums on „Cassini“ by Andrew Haaheim
Clavinova and additional guitar on „Six Dollar Sunglasses“ by Matt Beachey
Thank you to my family and to my friends, new and old.
Recorded in tribute (and prelude) to Season 3 of the Feral Boys
Technical assistance - Keegan Fraley
Engineering consultant - Matt Beachey
Design and production - Marcus Obst 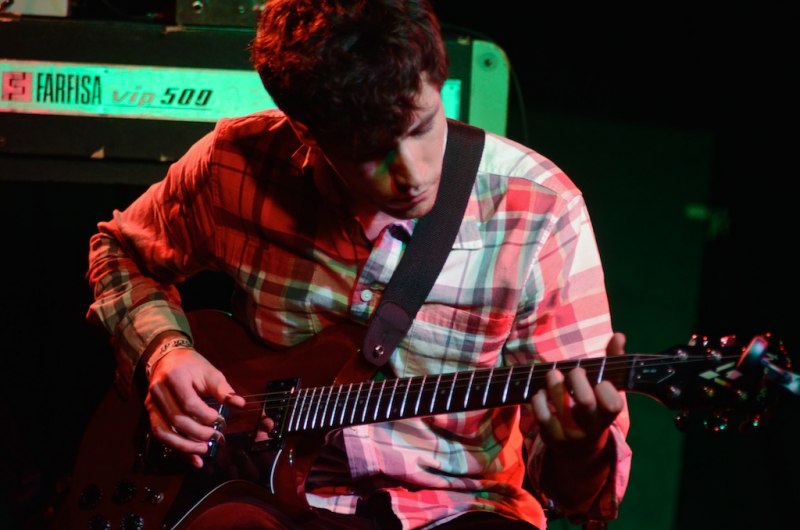 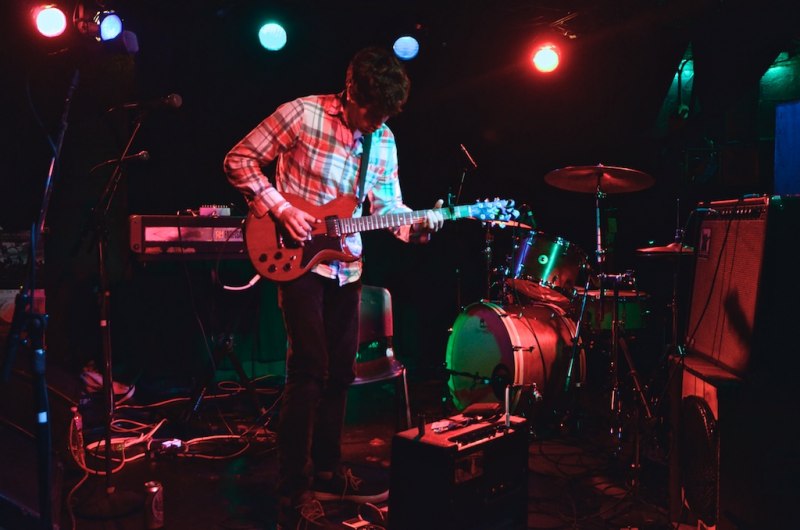 …Unblinking Sun may bounce around stylistically over the course of the album’s 40+ minutes, but the overall vibe is cohesive and engaging, drifting from dreamy, feedback-layered drones of ” Banjo Burner” to the noisy rattle of “Plastic Mouth.” As a new addition to the ever-expanding realm of recent guitar anti-heroes, Palmer is one to watch.
Tyler Wilcox for Aquarium Drunkard

It is likely that in some corner, some basement, or in some bar you’ve never heard of; guitarist Steve Palmer first cut his teeth performing and refining his style of guitar playing. It probably took years of effort and hours of stops, starts, frustrations, and tears. Wherever that likely happened though is a mystery. In the Twin Cities he seems to have emerged already fully formed as a virtuoso player. Perhaps that is due in some part to the fact that he studied under the legendary guitarist Peter Lang. Whatever the reason, Palmer’s new album Unblinking Sun, which he recorded on his own at home, is really terrific.
Palmer is a self-described Fahey obsessive, and in Unblinking Sun it certainly shows. The album is full of finger-picked experimental primitivism. It also, however, displays quite a bit of breadth in style – and doesn’t always adhere to what one might expect from a Fahey aficionado. “Cassini” for instance, is a krautrock groove that combines ethereal guitar layers over a hypnotic beat. Much of the material though, Fahey would have no doubt felt right at home with. “Plastic Mouth” is an Eastern-inflected ocean of noise made by shimmery strings, beats, guitar and tambourine. “Banjo Burner” is pretty much what it sounds like, evolving slowly into a squall of multi-layered noise. And doubtlessly Fahey would recognize “Stomping Tonight on the Pennsylvania Alabama Border” a cover of his own blues tune, complete with the ghostly chords of Skim James’ “Devil Got My Woman.”
Palmer navigates thematic changes and style shifts throughout Unblinking Sun flawlessly, maneuvering blues chords, psychedelic flourishes, and layer upon layer of sound with a hand that never waivers. Though each tune is a broad sonic exploration, Palmer can always be felt at the tiller, keeping each song on a course that never strays too far into the chaos that seems to linger just outside the frame. Palmer may have studied under Lang, he might be obsessed with Fahey, but he seems well on his way to becoming a legend in his own right.
— Jon Behm for reviler.org

Steve Palmer isn’t the first musician to invoke the spirit of the late and great John Fahey (see faithful troubadours Jack Rose and William Tyler), but his ability to mold rural guitar stylings with a sunny and psychedelic disposition sets him apart from simply being a modern interpretation of his idol.
‘Cassini’ begins with a cascading wash of crystal clear delay as it dances amongst a strict rhythmic drum beat, later flourished by the sun soaked crunch of chords and multiple layers of wah and country tinged guitar. Palmer doesn’t just abide mountainous terrain and downtrodden blues but also the free spirited landscape of the coastline.
Apart from a Fahey cover at the end of the album, his most obvious referential nods comes in the stripped down mediations of ‘Six Dollar Sunglasses’ and ‘Banjo Burner,’ where Palmer uses both his acoustic and electric guitars to negotiate calming pathways adorned by tastefully placed interceptions of ambient background textures.
— By Matthew Tomich for Life is Noise

Steve Palmer is from Minneapolis, MN and plays psychedelic folk that bears heavy influence from both krautrock and the American Primitive of John Fahey. Unblinking Sun is a hard-to-predict album because eccentric influences, and that unpredictably is truly an asset. Parts of it are undoubtedly pulled straight from the guitar picking tradition that Fahey inspired, of which I can never get my fill, and like Fahey himself Palmer wasn’t afraid to get experimental with it. It has the trappings sound collage with touch ambient noises and spoken word that provide the far out psychedelic folk with a theatricality. Nonetheless, it really is Palmer’s amazing skill with the guitar the makes this album anything at all, and boy howdy can he play.
— Spacerockmountain

The result is a collection of long, complex acoustic songs peppered with ambient and psychedelic flourishes that lend a whole jazzy improvisation feel to things.
— Wake The Deaf

the first of two preview tracks, ‘cassini’, i imagine named for the satellite, sounds like a cosmic journey to end all journeys. starting with an incessant drum beat and guitar drone very reminiscent of NEU!, it builds into an interstellar swirl of reverbed-out finger-picked madness. the second track, ‘six dollar sunglasses’ is a more reflective acoustic fingerstyle number, with a large amount of overdubs creating a psychedelic atmosphere.
— The Modern Folk Music Of America