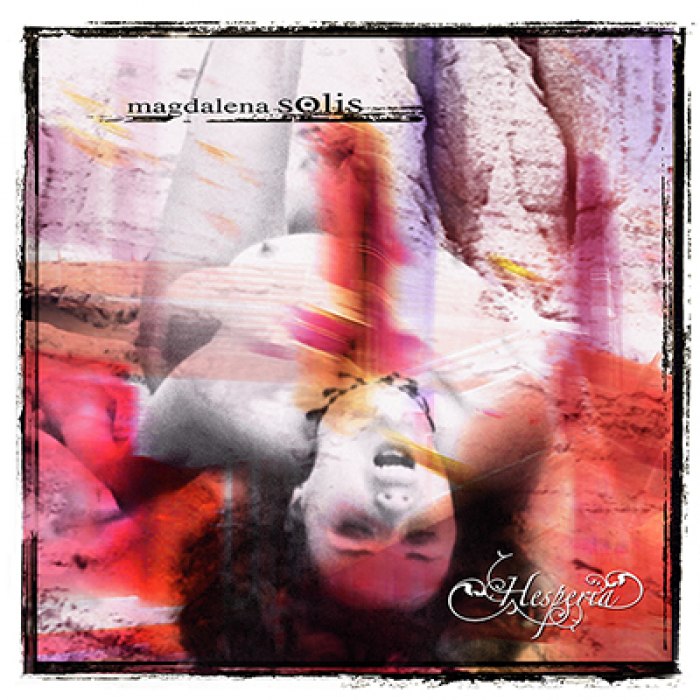 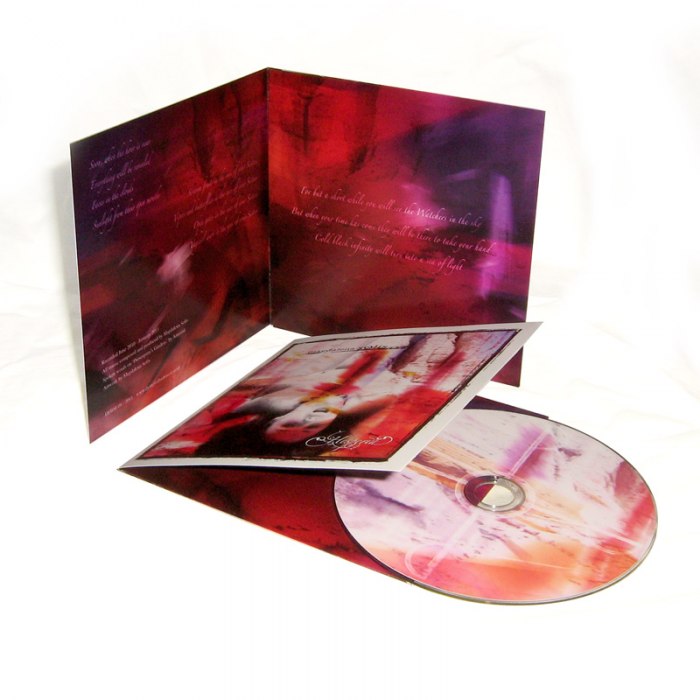 The name of the band, Magdalena Solis, refers to the priestess of an obscure Mexican blood cult of the 1960s. “Hesperia” could be the soundtrack of this cult.
Even if their music sounds dark and sinister, it is only so in the beginning, when the unknown substances start to work and turn you inside out. The underlying mood of the album is like a colorful journey to the weird and unknown states of your mind, something like an out-of-body experience. You tread where you never trod before. You take off your clothes, under a hot sun, and take part in a weird psychedelic orgy. A giant moog synthesizer shoots the energy like laser beams that attack your body and the delirious state you’re already in rises. Take a trip to Hesperia.

Magdalena Solis are a three piece collective from Belgium who get their inspiration from transcendental meditation, psychedelic movies and all the things that make your brain glow. Their music is created during jam sessions. The sounds are then rearranged later to get a more proper shape for a record.
The details of their music are like changing patterns in a kaleidoscope. It contains elements from oriental music, Teutonic krautrock and Alejandro Jodorowsky’s allegoric pictures. Melodies are composed in Arabic, Byzantine and Phrygian modes, and combined with the sounds of wahwah guitars, heavy moog fiddling, vintage organ and experimental cello surgery. These are the best ingredients for a psychedelic soup.

Portable mp3 players and iTunes and all the digital music out there has definitely changed the way we listen to music. Many folks barely listen to whole albums anymore, instead making playlists, or setting their devices on shuffle, and while in some ways, that’s a bummer, that the traditional concept of THE ALBUM, seems to be slowly fading from the collective consciousness, in other ways, it’s actually gotten lots of folks to listen to music they’ve had forever, but had maybe forgotten all about, and shuffle is the best thing to happen to deep cuts EVER. How often does some track start playing, and you’re forced to check and see who it is, and it ends up being some band you love, some record you love, but it’s a track hidden away mid record. And the other thing we’ve noticed is how much you end up listening to records that are in your iTunes RIGHT AFTER one of your favorite records, there’s that record you always listen to, which inevitably leads right into whatever comes next alphabetically, and bam, that next record is suddenly a new favorite too. Something similar happened at work, where one of the computers had an iTunes full of music, and there were certain records we listen to all the time, and like above, one of those records would play right into the next, and EVERY time, we would have to check and see what it was, and every time, it was a band called Magdalena Solis, so we checked the store, and the website, and we had never carried it. A mystery of sorts. Quickly solved when we discovered that it was sent to us by two awesome aQ customers, Wouter and Terje, thinking we’d like it, and boy did we, we LOVED it in fact, so much so that we tracked down the band, and then the label, and finally got actual copies for ourselves, and for YOU. And trust us, it was well worth the wait.
The sound of Magdalena Solis hovers somewhere between psychedelic space rock and kosmische krautdrone, which means it’s pretty much EXACTLY what we love, hazy, washed out drifts of dense distorted wah wah guitars, swirling FX, Eastern melodies, hushed angelic female vox, minimal drums, most of the tracks, pulsing and drifting and shimmering, and when there are drums, it’s more sort of a blissed out, percussion laced spacedronedrift, take “Seven Boys And Seven Girls” the drums a simple motorik pulse, the main melody looped and cyclical, the whole thing wrapped in effects-heavy swirls of distorted synth and psych guitar buzz, the sound building to a seriously blown out cacophony, only to settle right back down again, leading into the comparatively contemplative “Cities Crumbling Planets Growing”, a sitar soaked stretched of billowy low end, and distant sci-fi squiggle, barely there guitars slowly build into something, thick and fierce and spaced out and dreamily distorted.
The whole record is a series of smoldering slow build space drone epics, heavily layered landscapes of swirling synths, wheezing organs, skittery percussion, lush warm sonic swells, all wreathed in thick swaths of serious psych guitar, the sound constantly shifting from tranquil and dreamlike, to blown out and druggy/droney and way tripped out, heady and hypnotic and easily some of the best kaleidoscopic kosmische space/drone/psych we’ve heard. Most definitely recommended for fans of White Hills, Grails, the Alps, Expo 70, Gnod, Carlton Melton, Bong, Lumerians, White Noise Sound, Spacemen 3 and other droney, druggy psychedelic drifters…
Aquarius Records

Named after the priestess of an obscure Mexican blood cult of the 1960s, Belgian three-piece Magdalena Solis play the kind of mystical psychedelia that sounds appropriately transcendental yet with an edge of menace that befits their rather sinister source of inspiration. Musically though, Hesperia is less Latin American and more Babylonian and North African influenced, although the undeniably exotic rhythms are complemented by enough clanking industrial noise to draw favourable comparisons with the likes of Terrascopic favourites Teeth of the Sea and Gnod.
Nowhere is this esoteric melding of styles better exemplified than on “Cities Crumbling Planets Growing” a pulsating, writhing snake pit of a track and on “Prosperina’s Garden” in which Salome dances under the full moon to the howls of wolves and to a grinding organ that’s less Doors than Seeds (think “900 Million People Daily All Making Love”) as the Valkyries descend; Yes I know the imagery is confused and the global references a wee bit scattergun, but hopefully it gives you an idea of how colourful a kaleidoscope of an album this is. And it gets weirder and more and more “out there” as evidenced on the standout track “Sisters of the Twilight Mansions” and the absurdly, no brilliantly, titled “Crown Your Whores and Burn Your Kings”, which sounds exactly as orgiastic as you’d expect. It’s a shame they don’t make hippie exploitation or hammy horror movies anymore because you’d be hard pushed to find a better soundtrack than this.
Ian Fraser, Terrascope Online

Although it sometimes stands on old Gothic clichés, Hesperia sounds updated and relevant, with several great moments and interesting songs. Fans of dark, sensual and decadent music would probably love this album. As it is well made and well thought of, Hesperia should also appeal to others. Good job!
Culture is not your friend!

On their new album, Hesperia, Magdalena Solis create a wonderful world of pagan grandeur through music that feels rooted in the spirituality of everyone and no one. Its droning, often pentatonic, tonality at times sounds like an echo from the Far East, like in the album’s opening ‘Wake up and start to dream’. Hesperia’s sounds come to you on a thick, unrelenting, unforgiving wave of electronic sound – the sounds of dense guitars, a spectral harpsichord, an apocalyptic organ, electricity stirring and groaning underneath the Earth – the notes sliding and dancing around each other in a hypnotic heathen ritual. It is mysterious, seductive – something to be feared in the way gods expect to be feared.
The music of Hesperia has an incredible sense of place – places that are darkly spiritual, places where Magdalena Solis plunge into black, gloomy chasms and then build monoliths of music, casting huge grim shadows on you and in you, as if you are standing alone and alarmed at the end of the world.
This is music that towers over you. It leaves you feeling small and frightened and, by ‘Lunar Sunrise’, at the album’s haunted end, where a chilling, child-like tune is hammered out on percussion borrowed from another world, like an alien nursery-rhyme, you find yourself left hanging and helpless in a space that is huge and empty and where the only light is cold and grey, a dying sun reflected by a dying moon.
Bent Music Blog

“Hesperia”, by the Belgians Magdalena Solis, is an immersion into the farthest outreaches of the universe. A spaceship floating in absolute vacuum, a suspension in darkness. The sounds that emerge from each one of their songs are little pieces from a jigsaw puzzle which, as time goes by, transforms the sounds into outrageous, hallucinogenic psychedelic deliria. “Seven Boys and Seven Girls”, for instance, is one such masterpiece, while “Sisters of the Twilight Mansions”, where the sounds of bells cause our senses to shudder, is one of the scariest and most psychedelic songs I have heard in years; a true nightmarish pandemonium. Magdalena Solis are a psychedelic chariot, endowed with a thrillingly atmospheric psychedelic attitude, eastern-like moments, extremely fuzzed-up guitars with plenty of wah-wahs, an organ that colours mercilessly their sound, synths, discreet drums, ambient disposition.
Directions for safe listening: set your headphones at maximum volume, do not adjust your belts, let yourself go!
Gew Gaw Fanzine