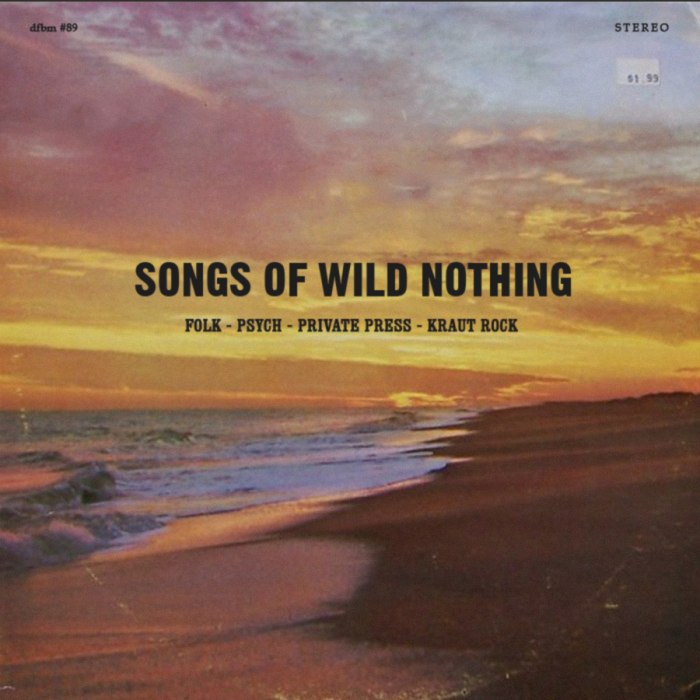 The fascination with private press records from the 60s, 70s and 80s is still strong. So again, on this mix is a lot of real peoples music, christian bedroom folk and other home made psych. Beside the dusty old stuff that record collector would play you only over the phone, a ton of new music is created every day. (What's a unit for a big amount of music? Tons? Gallons? Liter of new music?)

Songs of Wild Nothing starts off with one of my favorite bands, China from LA. They play wonderful psych pop, influenced by bands like The Byrds, modern indie pop and also the diy, private press oddness I mentioned before. China consists of Michael J. Tapscott of Odawas fame and musicians of Papercuts and other more or less known bands. Lot of potential here, but with a bold but ungoogable name it's quite hard to stick out.

Another, very new (in fact not even released yet) song comes from Wes Tirey's coming album Black Wind out on Scissor Tails Recordings this fall. Tirey released a handful cassettes in the last 2 years, all very lofi, sparse, often only instrumentals. With Black Wind he goes full band and it sounds just right. Great songwriting - somewhere between Cash and Fahey, if that is possible.

And then the clock is turned back to the end 60s.

Dane Sturgeon's album Wild'n'Tender - Righteous Folk-Rock became an instant favorite when I heard it the first time. It was meant as some sort of demo recording handed to producers to let their artists sing one of Sturgeon songs in return for royalties and song-writing credits. It didn't turn out as expected. Wrong time, wrong place. Many years later this album full of weird stories and odd folk rock tunes that sounded like a stoned Roy Orbison wrote them, is a classic and it got reissued by Yoga Records, along with a nice short feature film.

There is not much known about The Kentucky Raiders. Exactly one song is floating around on the internet. If someone owns the record, a digital copy would be very appreciated. But it seems like this is one of the gems a record collector sits on.

The Kusudo & Worth lp is worth up to 1000 USD. Unfortunately, a planned reissue of the album fell through, but the two gentlemen are still alive and play gigs together. I assume somebody is working with them to get the album out again, because it's a really good one and a shame that it is so rare.

Wasn't there a reissue planned for Sister Irene O'Connor's little masterpiece? I guess the release into the "blogosphere" watered down the demand.

Shameless Self-Promotion: Out on Dying For Bad Music

I rediscovered some post Kraut, Italo-Space-Disco track by the lesser know Richard Schneider Jr. and world music/space prog by W. Barthel, M. Böhm, R. Bauer. I've never heard from them before. Both projects are from Germany, as you can tell by the names.

Brand new music from Nathan Bowles with a minimal music inspired piano piece and William Tyler uses subtle melody in The Great Unwind that sounds familiar from the radio. (I was querying google with William Tyler+Dire Straits and The Guardian confirmed my suspicion.

American guitarist William Tyler’s excellent fourth album begins with an anxiety attack and ends with an interpolation of Dire Straits’ Sultans of Swing so subtle, I’m still not sure it’s there. -- The Guardian

If you are into detective stories, check out the strange case of Steve Kaczorowski - the Father of Karaoke Rock. Pretty fascinating story of con-artistry in the music world.

There is probably more to say about the other artists, but it would be all 2nd hand knowledge you find yourself on the internets. Feel free to drop some recommendations here in the comments. There is so much music I don't know about... I can't wait to hear it!

The cover is one of the iconic beach stock photos used on so many privately pressed lps.