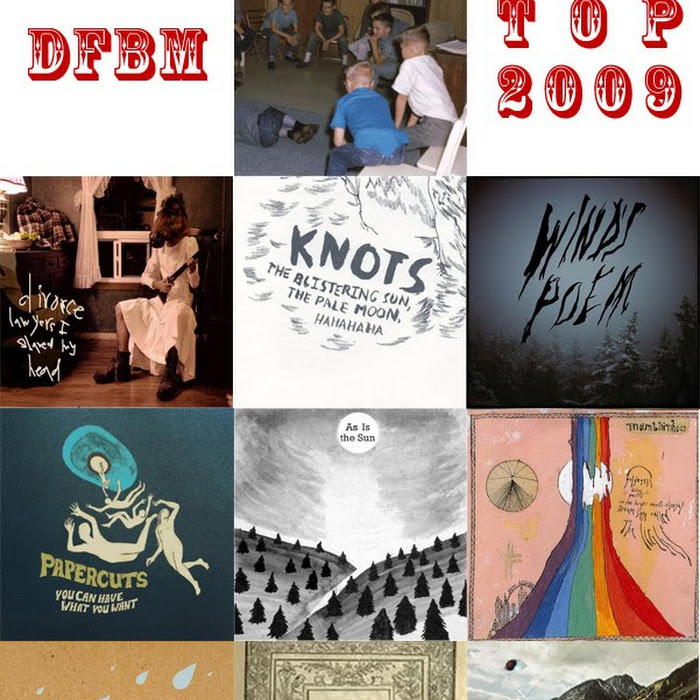 So here is my TOP 10 of 2009 - I keep it to 10, even if there are much more records to mention.
Strange but there mostly smaller releases from lesser known artists. But why not - that's what I am looking for this year.
Ok so here it starts:
10. Woods - Songs of Shame
Songs of Shame is good, even if I like the previous Tour Album "Some Shame" much more.
It's rawer - some tracks appear on "Songs of Shame". Worth to mention are the Sunlit 7" and the Acoustic Family Creeps - Album.
All are very good. something here @dfbm
09. Low - Fye - Trained Ghosts, Pages, The Comfort Soak
I love this boy's music. It's so simple and catchy and I am happy to release the first album next year on my new founded label. For the moment, get all of his demos for freee here at dfbm
08. Taylor Deupree - Weather and Worn
It's a 7" with 2 tracks and there exist a kind of longer remix of both tracks and this is so peaceful harmonic ambient music, it could be played nonstop. Myspace
07. Mountainhood - Goldeness Being Part I
This was on my imaginary top list the whole year since february. Great lo-fi folk songs with lot of tape hiss and frail voice.
He released 2 or more records this year which are very good too. more here @MySpace
06. Jason The Swamp - As Is The Sun
Great finding on Rack & Ruin netlabel. Very Microphones'esque. Lot of layerd drums and great songs, hummings, melodies.
I love it. more @dfbm and follow the link to rack & ruin
05. Papercuts - You Can Have What You Want
Discoverd just some days ago, so I have to kick something off this list, because it heavy rotated in my player.
Great reference to sixties/seventies pop music sounding/recording of Drums and Bass (see previouse Mixtape).
Absolutely wonderful. And if this guy was part of the latest Skygreen Leopard record, he can't be wrong. Myspace
04. Mount Eerie - Wind's Poem / Black Wooden EP
Disturbing but stunning record - you know it and it will appear on some more Top Year lists. ;-)
P.W. ELVERUM & SUN, ltd.
Aw, the new EP is great and the perfect follower of Dawn, must on this list :).
03. Knots - The Blistering Sun, The Pale Moon, Hahahaha
Beautiful songs from a young canadian. Very intimate songs. Get his selfmade CD from his myspace. (thanks to aerophones and aeroplans for introducing this)
02. Jordaan Mason and the Horse Museum - Divorce Lawyers I Shaved My Head
Sick record! Full of sick songs about sick themes. The most outstanding track is "Wild Dog! Divorce" It has such a great flow.
Oh and it's kind of Folk music played by a lot of people. Myspace
01. Navigator - Bad Children
I don't know how often I played "Blood" - it's such an intense piece of simple music. As I wrote in my posts about Navigator, before - it sounds like a drunken Win Butler of Arcade Fire in a garage.
This album is oversaturated and distorted like hell and will melt your ears if you listen at high volume at your iPod! Find all of this maniac @dfbm
And here is the obligatory mixtape of that stuff.
Check or not :)
Download dfbm Top 2000