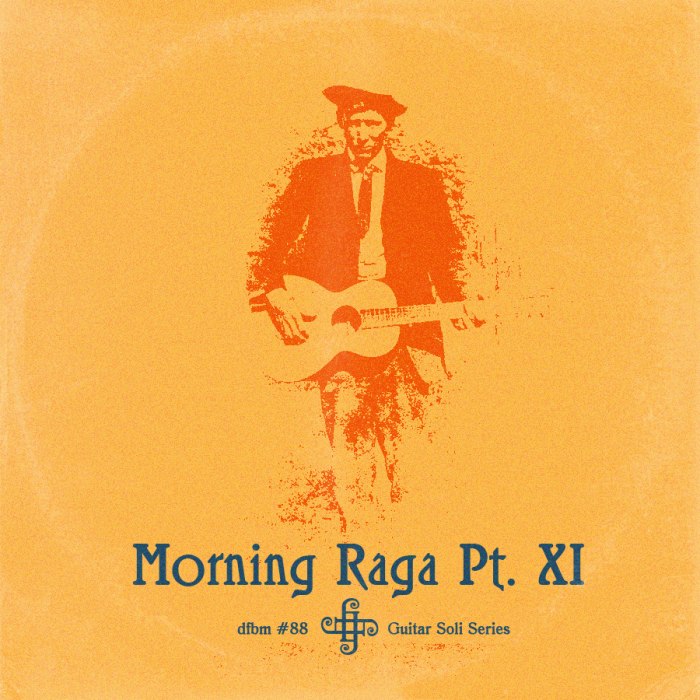 And welcome to a new Morning Raga edition. Two hours of solo acoustic guitar music, often referred to as American Primitive, like John Fahey called it. It still amazes me that Fahey influenced generations of musicians till today. And it's not only his way of playing the guitar, which was informed by country blues, the Berkley Folk scene and world music. His hoaxes, his audio collage techniques, running a record label and his peronality – all these things inspired artists over the last 50 years.

In these two hours I present to you brand new recordings and my new discoveries from the last decades (or just archive stuff).

Starting off with the opener of Marisa Anderson's new album "Into the Light" - her best album so far, in my opinion.

Followed by some sort of a hymn by Luke Hirst from the U.K. who just released a brand new album.

Like on mixes before, I included a track from the debut of Canadian guitarist Michael Kleniec. It's an improvisation over a Beatles song. Very weird mixdown. The whole album is mixed (or transferred) in a questionable way, but it's super rare so it's better than nothing. Andrew Creaghan is from the same country and of the same profession as Kleniec and his debut is rare as well. While Kleniec went the jazz route, Creaghan found a home in classical guitar. His album The Rainbow Bridge contains two long pieces that cirulate between Robbie Basho-like string magic and mind bending picking patterns that are so complex that the music almost loses their soul over the technical accomplishment.

With The Drain, Ignatz's music it finally clicked for me. His former output was ok, but I didn't get the bleak urban blues vibes. Now it all makes more sense. Great modern loner album.

Josh Rosenthal mentioned T. Damien in his book “The record store of the mind” in the chapter “Obscure Giants of Acoustic Guitar”.

Drunk Song No. 2 appeared on the Fonotone Records box on Dust-to-Digital and another song was included in one of Joe’s mix tapes. If someone has the song “Creamsicle” (or the other two), I would appreciate a digital copy.

Guitar duo Elkhorn is going to cross your way some more in the near future. They just appeared on the latest Robbie Basho tribute compilation, next to Steffen Basho-Junghans and Glenn Jones. There is a cassette by Elkhorn coming soon and for 2017 a full length album on vinyl is planned.

Perry Lederman is a lesser know and very influential guitarist out of the Berkley folk scene. He hung out with Garcia and taught Dylan fingerstyle guitar. I think he never released a proper album, there is just this posthumous cd released in 1995 by his wife (link in the playlist).

Beside Michael Kleniec and gary Salzman, Perry Lederman will appear on the coming Imaginational Anthem Vol. 8, out on Tompkins Square this fall. They dug deep to find forgotten fingerstyle guitar pieces from rare private press records.

Maybe or maybe not on IA 8 will be a track by Jim Kennedy. His album "Just being natural" comes with the typical sunset stock-photo cover and contains some really cool solo acoustic guitar and singer-songwriter tracks. It's a good late night listen with a slight loner vibe. Bob Patterson is quite similar, although he left some trails and released some more singer-songwriter/folk style records. Kennedy is just lost and unknown.

Atlanta bluesman extraordinaire, Moses Nesh recorded a new album and I am going to leak this phantastic instrumental without asking him first. Don't sue me Mo'!

Nick Jonah Davis' last solo acoustic guitar album "House of Dragons" was released on vinyl first and gets now reissued on a shiny silver disc via Thread Recordings. Do not miss!

Czech guitarist Jakub Šimanský is on with a really cool homage to Dan Bachman, the man who, in my humble opinion, (re)ignited the interest in solo acoustic guitar music with his prolific touring and releasing activities.

Ryley Walker's track, recorded at WFMU a few weeks ago, has to be included here, because of his beautiful guitar picking. This guy is so unbelievably good.

This mix closes with a track by David Qualey, an American guitarist who moved to Germany in the early 70s, because people appreciate his instrumental music more overseas. He's more the softer Windham Hill school. Classical music influenced fingerstyle guitar. I found this lp really cheap in a record store in Prague. It's not really my cup of tea, but the record remembers me of a nice time in a beautiful city with my love.

I try to attribute everything - most of the time, google will lighten things up.

As always, I appreciate your (silent) support. Thanks for listening and sharing. Enjoy!