Sam Moss is one of the new young guitarplayers who HAS been featured here a lot. He recently curated the awesome Imaginational Anthem Compilation and is on tour as part of the Howling Kettles String-Duo and release as a solo artist too. Time to ask some questions.

Hi Sam, please give us a short introduction.
What is your musical background?

I started playing violin when I was seven, picked up guitar five years later, and banjo a few years ago (I am twenty-three now). In college I studied composition.

You recently released a tape of (electric) guitar improvisations on Plustapes. Does your mood influence the resulting music? I remember this christmas album last year. It felt sometimes pretty lost and lonely or very intimate in general.

The Tempest May Howl is actually on acoustic guitar, just processed to sound sort of like an electric. I recorded that in one 30 minute sitting. I didn't anticipate doing it, I just had a moment of powerful inspiration, which happens once in a great while. Much of the music I make serves to help me process my mind. I think most of what I have recorded tends to focus on the lonesome side of the spectrum. My hope with the christmas album, however, was to have it just be serene and plain. That was all about letting the melodies of those songs sing. If I ever have made an easy-listening disc, I think that's it. 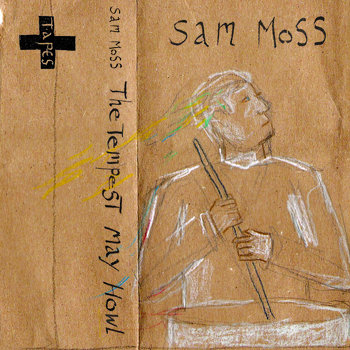 The Tempest May Howl
by Sam Moss

Recorded in a moment of fury one December afternoon.

Artwork by Will Moss.

With the Howling Kettles you play together with Jackson Emmer in kind of a Stringband. Is there an intentional approach to develop traditional American folk music or is it just for fun and to keep this music alive?

We don't necessarily approach it from a particular angle or sub-genre. The material we play comes from digging through old recordings of folk, blues, and country. Some of the tunes are familiar to most folks but many are not. I look at what we do as a more 'fun' side of my musical life. It feels good to get the audience dancing.

You curated the coming Imaginational Anthem 5 Compilation on Tompkin Square Records. I think it's so far the best in this series. On Volume 4 they changed to choose more contemporary guitar players. Did you have a specific concept or criteria for what you wanted?

Thank you! For me the only criteria was that I find twelve of the very best players that I could, and that it be an eclectic group. There are tracks that are more aligned with the Takoma school and then others that have nothing to do with it. I think it is an impressive display of what can be done with an acoustic guitar.

What do you think will be the future of (solo) acoustic guitar music?
Will the ghost of Fahey & Co always be present or can you imagine something totally new?

I can't really say, though people are probably going to talk about Fahey for many years to come.

Personally I think, guys like Cam Deas are exploring new ways in this field of music. Also your solo work is really unique. So what is important for you? Finding your own voice, or keeping the roots alive?

I strive to balance my efforts between honoring the roots and twisting them. I have a deep love for American roots music, and I want to be part of that realm. At the same time I strive to push the walls out a little bit more. I think what Cam does is in a different world at this point. I mean that in a good way.

Do you feel any limitation with your six string guitar?

No, there is an endless well within it. I just sold my twelve-string. Maybe I'll get another someday, but six is good for now. When I want a different experience I pick up my banjo or fiddle.

What kind of music do you currently listen to?

Not as much as I should. But lately I really like Spirit Family Reunion. Listen to their album, No Separation. At this very moment I am listening to the new Cody Chesnutt album for the first time. It's very good so far.

Is there a music genre which will never get its way on your turntable/cd player/mp3 player?

I don't want to say that there are styles of music which I will never listen to. Some resonate with me more than others, but I don't rule anything out on the basis of genre.

Any recommendation or announcements ?

I just got back from a residency at an Artist's Colony in New Hampshire called the MacDowell Colony. I recorded what I think will be my next album in the five weeks that I was there. Depending on whether or not I can find a label it should be out in early to mid-2013.

Thanks Sam and all the best for the future!