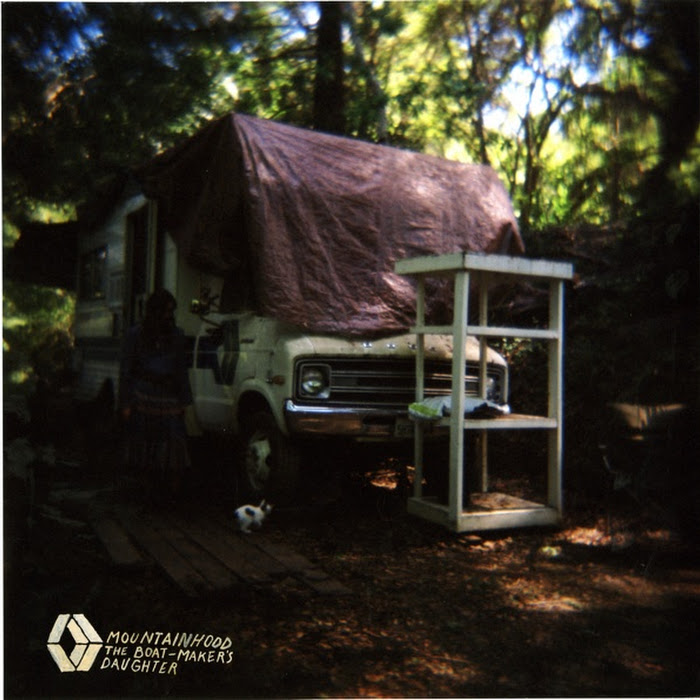 # lo-fi, psych folk, freak folk
Michael Hilde aka Mountainhood is one of our all-time-faves and so I am happy to inform you that he did it again. Recorded a handful songs and the nice people of Blackburn Recordings release it on vinyl. After a lot of CDrs he deserves to get his music on a more durable format.
The recording sounds a bit cleaner than on his former stuff, but there is still the same intimate athmosphere as when he sit in front of you and sing you some of his strange songs in his weak voice, picking notes on the steel strings of a big acoustic guitar.
I love it because of all the imperfectness, the tape hiss, the accidentally picked strings while playing guitar. The music is similar to his drawings. Meandering ornaments, blobs of watercolor, light, archaic characters, symbols and so on. If you like to get more into his art and imaginary world check out here
We are happy give you (nearly) exclusive two songs from the new album.


The Boat-Maker's Daughter is a record about transition and transformation. It is an expression of total breakage from all prior forms of thought and action--your parents, your government, your faith--and blazing a new path through doomsday to the other side. The songs range from the quiet, fragile, and distant "Geodesic Dome, Oregon" to the anthemic folk sing-along of "Jaine," one of the most accessible songs in the Mountainhood catalog. With The Boat-Maker’s Daughter, Mountainhood has transformed and shed much of the tape hiss that defined his earlier recordings, and let these very special songs of rapture shine through. This is not only a singular release for Hilde, but for the entire psych-folk genre. Poster designed by Hilde included.

You can order it for $15 (or $21 for international orders) at the label website. And maybe you want to get it along with the new Sore Eros 7" they released. I think it's totally worth. And if you have a closer look on their website, you will find a free mp3 compilation. So check it out!