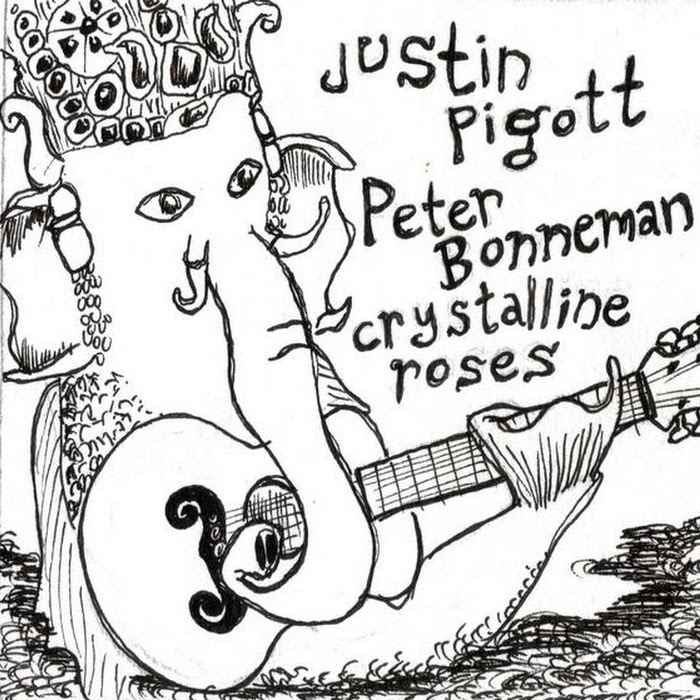 This release is mind-blowing for several reasons and I don't know where to begin, laying out some of the facts that I found. Maybe it's enough to mention Fahey as the Godfather of solo acoustic guitar to make you interested in this. It would be enough, but I'll try to draw a bigger picture.

Basically, this is an underground release, made by some punks, photo copied folder, cdr, sold on shows, that's it. The music ranges from lofi folk songs to american primitive inspired solo acoustic guitar pickings, which seems to be a bit unusual in this setting. On the other side, there are quite a few releases from, let's say a drummer of a hardcore band who sometimes grabs a wooden guitar and pulls some nice melodies out of it. (eg. Jackson Van Horn, drummer of TV Ghost)

So let's get started with Peter Bonneman and Justin Pigott before I get to Anthony Pasquarosa aka Crystalline Roses. Bonneman seems to be some cult figure of the Danish/Swedish punk scene. Best known (and unknown to me) as founding member of Gorilla Angreb. For this release, Bonneman provided a handful of really nice fingerpicked guitar songs accompanied by lyrics, sung in danish. It's really charming and reminds me a bit of Mirel Wagner in tone and mood, just more lo-fi. This split won already my heart with this opener by Peter Bonneman.

Pigott was member of the now defunct US Hardcore band Guilt Lust and he also released this 3-way-split on his label Devine Noise (which also doesn't exist anymore). I don't know much about American HC since I was more into German Punk as a kiddo, but impressive guitar skills seemed to be always the least important feature of a punk guitarist. I don't know anything about Pigott and the scene in America, but his contribution to this release is some really fine steel string picking. Maybe nothing compared to Glenn Jones and the other pro pickers, but hey this is very charming and I am easy to impress.

Last but not least, Crystalline Roses aka Anthony Pasquarosa, who got some more attention for being part of the latest VDSQ Solo Acoustic Guitar releases, along with Bill Orkut and Sir Richard Bishop.

Anthony is also part of the DIY punk movement. Maybe more in terms of playing in such places, because it seems he is more interested into psych music any couleur than fighting for Anarchy. I didn't get too much into his side projects like SQRM, World Domination or Heaven and Earth Magic with Zac Johnson (which is actually some really nice psych rock), but it seem that Crystalline Roses is Pasquarosa's main project and another link in the chain is Ted of Feeding Tube Records who released the album One Man Cult on vinyl.

I see Pasquarosa as some sort of pagan psych punk and if you want to get a sense about him and his work I highly recommend to watch the great documentary "Music For The Sky" by Nikolai Fox where he gets portraited along with his friend Zac Johnson and some other fiddlers from MA. (I collected everything on a post about Music for the Sky on my tumblr blog, so find additional videos and order information there).

Back to the 3 way split - Pasquarosa's part varies from really bleak psych folk in vein of Michael Gira, to old timey tunes, like in My Yellow Mama where he accompanies Pigott on his banjo. Noteable is also the closing Charles Manson cover Home is where you are happy.

I totally like the cover art here. Anthony is doing the artwork for most of his releases and posters.

There is no bandcamp link this time, but a good old zip archive to DOWNLOAD. Let me know what you think!

I digged out the information about this release, Bonneman and Pigott from a blog post by I could die tomorrow, found in the archive.org wayback machine. There was also something on Tony's blog.

Speaking of, you should follow Pasquarosa's blog, dig around in the archives or just look it up for live dates, like next Saturday (August 2nd) where he is playing at the Northern Routes New Music Festival in New Salem, MA.

And again, go purchase a digital copy of Music For The Sky, it's absolutely worth watching it!