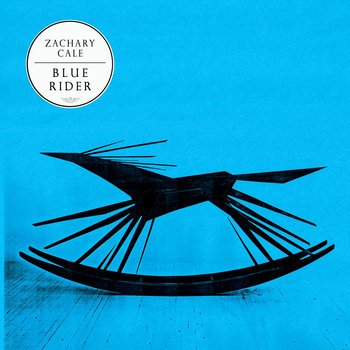 Often cited by critics and peers alike as a songwriter’s songwriter, Zachary Cale has been quietly constructing a catalog for nearly a decade, one which showcases mastery and a unique voice across folk ballads, guitar instrumentals, and country-tinged rock.

On his 4th release, Blue Rider, Cale’s songs are marked with his signature finger-style guitar playing and lyrical command. Abandoned are the full-band arrangements of his previous album, 2011′s Noise of Welcome, for a minimalist approach that illuminates his strengths as a solo performer. Blending the echoed open-tuned guitar patterns of artists like John Martyn and Bert Jansch with the desolate American lyricism of lone riders like Simon Joyner and Elliott Smith, Cale continues to stand out as a songwriter of uncommon power.

The title Blue Rider refers to the passing of yesterday’s vanguard, a group of painters that were known for their wild jagged color, but it also brings up the blues. Cale claims, “It’s sort of like my “blues” record, I’m using the same tuning that Skip James used, or what Fahey called ‘The Sphinx’ tuning.” And, with song titles such as “Hold Fast” and “Unfeeling” the reference is both musical and lyrical. The image of the bluesman or troubadour is an iconic one in the American psyche, and Cale plays with this image in a unique fashion upholding the idea that above all: the solo artist lives as a servant to song.

Blue Rider was written and recorded between tours of the U.S. and Europe in 2011-2012. Life on the road informs the albums eight songs which convey both the solitude of touring, and the excitement of the unknown. Lyrically the songs stray from a traditional verse-chorus-verse scheme, and instead are broken down into musical sections wherein flashes of images are placed, suggesting a sense of movement in both narrative and structure. “Hangman Letters”, with it’s breathless phrasing tells of a storm coming with the lyric “Shadows walk across a jagged sky / Lightning strikes this heart I hold / My blood is boiling now / For I am the only sound.”

Musically Cale incorporates a highly syncopated rhythm in his playing blending the melodic Piedmont picking technique of Pre-War country blues players like Mississippi John Hurt and Blind Willie McTell with the two-step rhythm of Buck Owens and Merle Haggard. “Wayward Son” and “Hold Fast” are great examples of this complex style. The songs were recorded by Matt Boynton (Kurt Vile, MGMT, Bat for Lashes) and are fleshed out with electric textures and analog synthesizers which lend a cosmic effect to the performances. This forward thinking approach to roots music is what Cale has been driving at since he started.

"Beautiful. Excellent. The best of the year." -POP MATTERS

7.9 rating on Pitchfork. "The first thing beckoning you towards Blue Rider is its atmosphere—spacious, cool, distant. Zachary Cale's mesmerizing finger-picking, drawing on open-string drone and country blues tunings, wanders restlessly around a clean, well-lit place of a mix, synths humming like 3am refrigerators and chiming guitars confusing your sense of middle distance. It is a misty, gorgeous record, a space that feels wonderful to roam around in." -PITCHFORK

"Blue Rider is an album of rich textures and intimate melodies, a gorgeous collection of songs that bristle with enthralling, understated details." -AMERICAN SONGWRITER

"Cale makes timeless music, steeped in 1960s folk, but without a whiff of mimicry, always built around his effortless fingerpicked guitar and world-weary, soulful voice. There is no pretense in Cale's music, and his meticulously detailed yet understated sound, relaxed but undeniably lush and embracing, have long made him a "musician's musician"; it's easy to get lost in the easy flow of his playing, and the quiet sway of his voice." -OTHER MUSIC

"If there is any justice in the musical world, Zachary Cale will soon get the acclaim and the rewards his talents deserve." -THE MAD MACKEREL

"I’m being true to you when I say that Zachary Cale is going to be soon recognized as a darker guitar strummin’, gracefully-singing gem of the singer-songwriter genre." -SSG MUSIC

"The warmth of Blue Rider, reveals an intimacy that feels natural when so much modern songwriting seems contrived. Adorned by lap-steel, bass, drums and synthesizer, Cale’s lovelorn Americana echoes with only the slightest hints of psychedelia around the edges, a relaxing, easy listen with plenty of compelling details. The centerpiece is Cale’s fingerpicked acoustic guitar playing, which displays an emotive and lyrical voice which match the subtle atmospherics of his inflections. With remarkable consistency, every song blends together creating a mood piece that unravels over the course of these eight tracks." -SWINGSET MAGAZINE

What Zachary Cale gets to on Blue Rider is an oblique sort of courage, a contract with oneself to keep going. In many ways, he’s never been closer to a truth that seems to work for him than he has with these eight songs..." -STILL SINGLE

"Blue Rider is a road album. One of those collections of songs that stretches out in an infinite expanse as it plays, uniquely singular sounding, but often blending into one indistinguishable stream of sound. The album’s bluesy backbone is inarguable, but what Blue Rider really is is a record that expands slowly as it progresses forward, leaving the listener with the feeling that, once it’s over, he’s going to need directions to get back." -CMJ

"...his manipulation of his many influences – from Dylan, to Joseph Arthur – proves unprecedentedly exemplary, and it’s by wielding the tools left behind by his predecessors that Cale has so dextrously carved out his very own recess removed from the stresses and strains of an external world. -DOTS AND DASHES

"Brooklyn-by-way-of-Louisiana troubadour Zachary Cale headlines with his husked and dusty alt-country: the kind of soulful guitar picking designed to set deserts on fire. His ragged and bittersweet blues should make Cale unmissable for aspiring non-sucky songwriters." -THE STRANGER

"...Zachary Cale is one of those wanderers who seems to have found himself far from home quite often. Focusing on that classic, attentive songwriting, Cale is inventive to his craft." -KEXP

"Live, Cale came across with a troubadour's natural grace, striking a balance between Neil Young's furrowed intensity and the storyteller charm of 70's Tom Petty..." -RAVEN SINGS THE BLUES

"Zachary Cale embodies the true essence of being a singer-songwriter. The Brooklyn-by-way-of-Louisiana artist tugs at your heart strings with his rich bodied songs, crooning philosophical tunes of love had and loss over acoustic melodies. His most recent single “Wayward Son” continues to showcase his talents. Like a mille-feuille, this song is layered with goodness. Each listen reveals another amazing set of chords or lyrics that you had missed before. And with each go-around, your appreciation of Cale’s effortless plucking and beautiful prose increases exponentially." -ALL THINGS GO 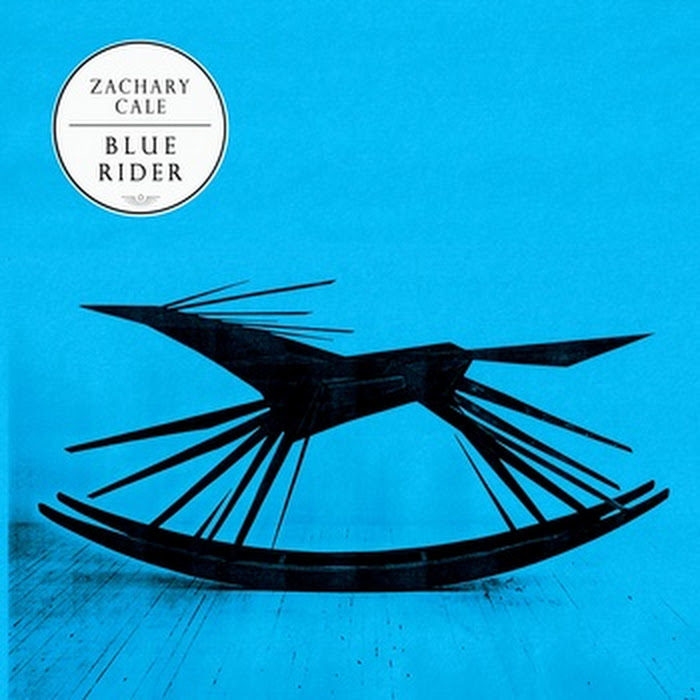 On his 4th studio album, Zachary Cale goes back to his roots of him alone with a guitar and words coming out of his mouth. His songs work very well in a full band context like on Noise of Welcome or the older album See-Saw by his band Illuminations or just as a solo-performer like on Walking Papers.

Blue Rider is more in vein of Walking Papers but much more mature and experienced.
The balanced use of reverb gives the mix an airy feel and makes it shiny.

And finally he got some more press after the years of touring, writing and recording music and running a label. May more people discovering his music, than people who are making music themselves.

“Zachary Cale is a songwriter’s songwriter, as prolific as he is original. His voice can be delicate for love or wry for satire. The ability to hear what is in a song has guided him well in the making of his own.” -WFMU

Apropos label – somehow he's got a good connection to Germany. The title Blue Rider referes to the German art group Der Blaue Reiter, Noise of Welcome was co-released for Europe by the Berlin based label Adagio830 and Blue Rider is released on the German label Jellyfant Records. This will save you the ridiculous shipping costs if you try to get the vinyl record from the US! So Europeans, please go to Jellyfant Records Webstore or Bandcamp to order Blue Rider! Or if there is something like a record store, they should be able serve you too. Americans should order from All Hands Electric.

Zachary Cale is currently on tour with his Band and as support and 6th bandmember for the Crystal Stilts.