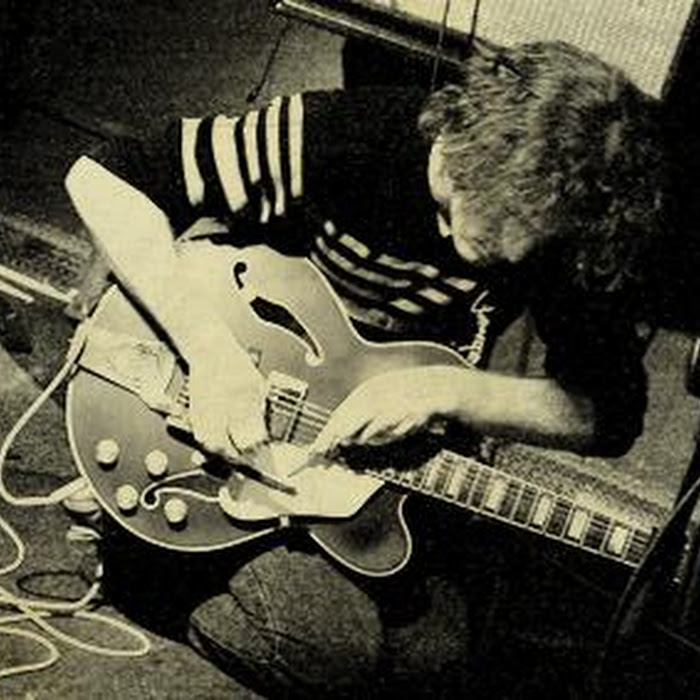 I first heard about Rebecca's Room via the great Weird Canada blog, which features - you guess it, all styles of indie music from Canada.

Then I found out, that there is not so much to find out about Rebecca's Room (beside the fact, that it's not inspired by the eighties post-punk group from UK). So after switching through Andrews YouTube channel I asked him for more music and he was so kind and sent me two releases - Rebecca's Room - The burned cd II and Andrew Gillis and his imaginary Orchestra - The night was undone in her fighting with the sun.

So Rebecca's Room is kind of Garage - Lofi - Pop - Folk with strong psychedelic influences (as psychedelic an odd played flute can be) and sometimes it reminds me a bit on turkish psych god Erkin Koray mixed with the Kinks and Syd Barrett's solo work. His Imaginary Orchestra is different but has the same quirky and shaky charme.

So listen to some tunes, download a compilation I've made from his two releases and read this interview to find out more:

# Hi Andrew, how are you? And where are you? Any plans for summer vacation or are you already on the road?
A: Hello Marcus I am in a pretty good mood listening to beautiful gregorian chants in my apartment here in New Waterford.
I live on Cape Breton island which is in the atlantic Canadian province of Nova Scotia. It's a small town with a population of about 8,000 people.
No major plans this summer, just enjoying the summer weather while it's here, painting and playing shows with Rebecca's Room.
# What is your musical background? I guess, as a multi-instrumentalist you had and still have some musical education since you where a child?
A: My background in music is completely autodidactic. I have no formal music training. I read music theory/composition books and learn from other musicians. I started with guitar when I was about 9 years old. 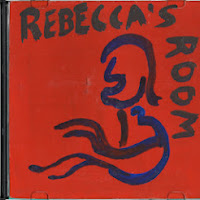 # Tell us please about the approach of Rebbeca's Room and Andrew Gillis and His Imaginary Ensemble and which project you are running too?
A: Rebecca's Room is my band. There are three of us. I write most of the songs and play guitar and sing on most of the recordings and in the live scenario. The live performances are interpretations of the recorded material with improvised jamming. I started  writing songs under the guise Rebecca's Room in 2008.
Rebecca's Room - Dreamer's Dreamer
Andrew Gillis & His Imaginary Ensemble is me pretending to be a sort of orchestra. I play all of the instruments 99% of the time in the recordings. This is music I make for myself to play while I paint in my apartment. There are medieval, traditional and tribal/primitive influences. I think of the music as very visual sorts of pieces. The CD I have been circulating,
"The Night Was Undone In Her Fight With The Sun" was recorded mostly late at night and early morning. 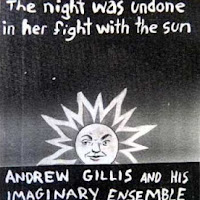 Andrew Gillis and His Imaginary Ensemble - Rosebud garden of girls
# For me, your music sounds like having a good time, playing music together with friends, jamming and just enjoy playing and adapting styles etc. Is there more behind it, like a concept, philosophy, esoterica or just being stoned and float on sounds?
A: It is all of that, you nailed it.
# Is improvisation the start of a song or do you have a clear idea about a song?
A: I improvise with rules. Sometimes I will improvise a piece on one instrument then teach myself what I played and layer  it up with other instruments. Other times I start on paper. I often compose on an electric piano.
# Are you involved in some kind of scene or group of artists or musicans in your hometown or do you work all alone?
Are there any projects you like to mention?
A: I am not interested in being part of a scene or joining a group. There are local song writers and artists I enjoy but rarely do I collaborate. Music is personal for me. I am interested in expressing my own internal processes. Some local artists I like are Craig Currie from Halifax NS. He records as Chief Thundercloud.
Colette Deveaux from Sydney NS, she has a very beautiful voice Jemo she also has a bandcamp page.
A film maker friend of mine Ashley Mckenzie has just finished a short film that premiered at Cannes film festival you can view a teaser here. My good friend Winston Degiobbi (also a film maker) is the lead male in the film and Rebecca's Room contributed a piece of music to it.
# What are your influences in general (Music, Art, Movies)?
A: I am influenced by the up and down swing of life. My relationship to myself and the people I love have the most creative impact on me. I do art with children and that is inspiring too.
# Do you have a vision of your future music, how it sounds like, what do you want to accomplish?
A: I try to be involved with the children in my community teaching art programs voluntarily and through government grants. I would like to see my art program expand and be a successful example of a positive outlet for local children and youth. My goals with music are simply to play it and have some of it on vinyl.
I don't know what the future will be like for me.
# Is there a reason that you just burned some CD's on request so far and provide your tunes on youtube?
I mean youtube, even if it's a much used platform to find music, is not the optimal way to publish music online.
So are there any plans to have a proper release in future (cd, tape, vinyl or just a zip file on some online label or bandcamp selfrelease) or do you care more about creating music instead of publishing it?
A: I would love to have my music on vinyl. I send Cds out frequently and occasionally someone with a DIY label releases a tape or a lathe cut. It's just a matter of time I guess. I don't have the money to do a significant vinyl release myself. To me a Cdr is just as good as a professional CD release, its cheaper and sounds the same. Online digital releases are fine. I just don't put much effort into publishing right now because I am more ambitious about creating.
# Anything you want to tell us?
A: Keep up the good work! I discovered Daniel Bachman, Violeta Päivänkakkara and some other great musicians through your blog.
# Thank you, Andrew.
A: Thank you!

Appendix: I think the following recording sums up Andrew's work and approach. It's the joy to play music.