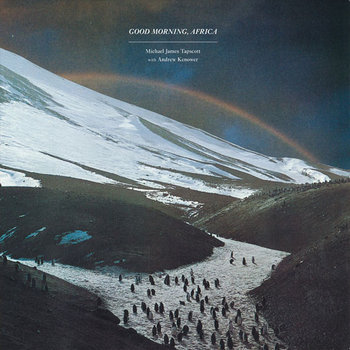 ” Michael Tapscott, better known for being the main man in Odawas, has continued his exploration into his ambient, dark folk, cosmic leanings with ‘Good Morning, Africa’, a stunning document demonstrating his gift for the sublime. The album deftly flits between manipulated field recordings, indie folk tunes and ambient drones. (…) A tonally blissful encounter. “ 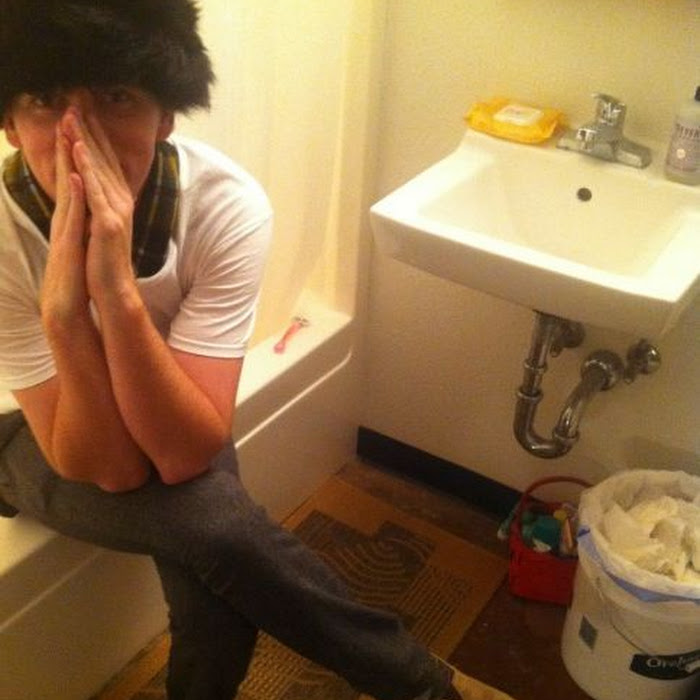 After the first listen of „Good Morning, Africa“ by Michael J. Tapscott and Andrew Kenower, I knew, this is my favorite album of 2012. The mixture of sublime folk songs and down to earth field recordings connected with ambient soundscapes makes it perfect, at least for me.
So start „The Polo Grounds“ from the album and read this interview.

Hi Michael, how are you and where are you?
I am quite good, right now I am in Oakland, CA, right near downtown.
So what is the story behind your new album with Andrew Kenower "Good Morning, Africa" ?
I have been trying to combine my two favorite styles of music, long-form ambient and the best song you've ever heard. I'm not saying I can do either, but that is what I am attempting. Also, for years I wanted to make a sort of hippie-environmental record much like The Beach Boys' SURF'S UP album. This was also my attempt at that. I saw "Good Morning, Africa" phrase on a calling card at a gas station. The phrase seemed full of life to me, so I stole it!
To be honest, these are the best songs mixed with creative soundscapes, I've ever heard. I love the positive vibes of the album title and the contrary album art. That's reflecting the music in a very good way.
This is the second release with Andrew Kenower. Who is he?
He's a poet, photographer, warehouse worker, political activist, field recorder, general man-about-town here in Berkeley and Oakland. He provides some of the ambient works and field recordings, and provides general inspiration for the ideas.
How was the idea born to mix Field Recordings with your songs?
I have always loved natural sounds of the streets and nature mixed in with regularly recorded music. I like when these sounds encroach on the music I listen to, so I decided to force the issue! 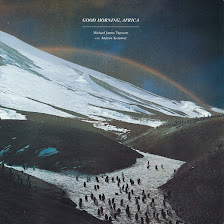 Oh man, that's an approach I always have in my mind for my own work. I love the situations when I'm listening to music that have field recordings worked in and I look up confused and don't know if it comes from my stereo or from outside.
What do Field Recordings mean to the album? Are they part of the story or do they just work as soundscapes to connect the songs?
Both. Most are from totally unrelated sources to the story, but their sound helps create the atmosphere in a way that just pure music cannot.
What is the difference between your own solo work and your work with Odawas?
With Odawas, Isaac Edwards is a big part, if not bigger than myself, in creating the sound and scope of the records. My solo work is a way to get my own ideas out and get away from Isaac's laborious practices.
Are you guys planning a new Odawas album or will you focus on your solo work?
+We have an EP done, not sure of the release plans for it at the moment, if any, and half of a studio record recorded. Isaac seems to be having an artistic crisis, his musical tastes have moved far beyond a rigid structure and he is struggling to reconcile the two, so for now I am focusing on solo stuff.
You are part of Donovan Quinns new album Honky Tonk Medusalem. How did this happen?
I met Donovan a few years ago, we both worked with Jagjaguwar as unsuccessful acts on a very successful label, so we sort of gravitated towards each other I guess. It's been a pretty splendid and heated relationship ever since. I would like to take our collaboration further, currently I'm just playing keys and a little guitar on the side for him.
You run your own label too. What's your experience? Do you regulary sweep the dust from the boxes of 12" and cd's in your bedroom or are they nearly sold, over the years? What do you think is the future of DIY/Indie Label Businesses? Are tapes really more valuable than CDr releases and when will the VHS video revial come (just to have an vintage counterpart to vimeo and DVDs)?
+My experience running a label wasn't great. A good friend in the business who used to run a successful label told me before I started, "Don't do it, you won't be happy," and I found out in every way he was right. I barely sold anything, didn't have the time, energy or enthusiasm that was needed to make a dent in the community and I haven't released anything in years. I've been in love with the DIY label since I started, the experience only taught me to admire the dedication it takes to deal with such misery.
I saw my friend, Brad Rose, over at Digitalis is closing up the tape label he ran, so maybe that's over already? As for VHS, I only watch movies on the computer or in the theater cause I have no TV, so I guess I'll be left out of that one.
What are your influences for your music? In music, art or life in general?
Film is much more influential at the moment. Honestly, I am having a bit of a problem listening to music. I just can't seem to get into it, when I drive I'm listening to talk radio, when I'm home I'm watching movies, when I'm out by myself I read and listen to the sounds around me.
I'm looking for moods and stories, and at the moment anything but music is providing that for me.
So any recommentation for movies?
I feel like I'm seeing new great movies everyday, I am devouring them right now. Last night I watched, "Meet Me In St. Louis," "Dark Passage," Melancholia," and "Close-Up." Each was almost better than the next.
What are you listening to, currently?
Haha, as I said not much. A lot of older country, George Jones, Hank Thompson, Conway Twitty and Buck Owens. The sound of black and white movies is my soundtrack at the moment.
Would it be an option for you, composing more scores for movies?
You already did this for the Sunny California short movie (released by Digitalis 2010)? What's the story behind and is this movie available anywhere? I just found that trailer.
Talking about b/w movies. Do you know Guy Maddin's "The heart of the world"? It's an awesome short movie in style of The Cabinet of Dr. Caligari with music by the russian composer Gregory Sviridov.
I have seen that Guy Maddin short, it's incredible.
I would love to do way more movie things. It seems to be a fairly clandestine community, I once met someone who was working on some bigger projects and asked him for advice, he declined saying that it was too competitive of an industry to offer help. I found that pretty funny, actually.
I think you can find "Sunny California" online somewhere, the director is a friend named Neil Blakemore. We worked at a record store in Bloomington, Indiana together and he is currently trying his hand at LA.
What is your favorite chord and your favorite sound (synth, environmental sounds, whatever) and your favorite musical gadget (stompbox, FX, instrument) why?
My favorite sound is the combination of the Movie Soundtrack setting on a RadioShack keyboard and a classical guitar. It's the sound of bliss in my head.
I don't use a lot of gadgetry or pedals, but every once in a while I pull out my BOSS pitch shifter pedal because it has a nice, clean delay on it.

Thank you Michael for the Interview and Marie for some corrections in my questions! Photo by cj o'sullivan