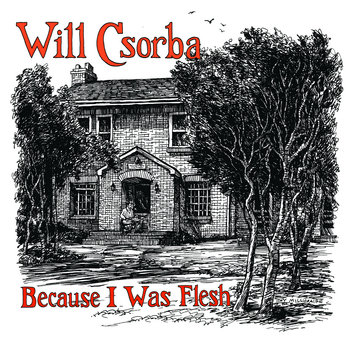 Because I Was Flesh
by Will Csorba

All songs by Will Csorba except "Poor Boy Long Ways From Home" (Trad./Fahey) and "Dark Was The Night..." (Johnson).

Will Csorba
Because I was Flesh 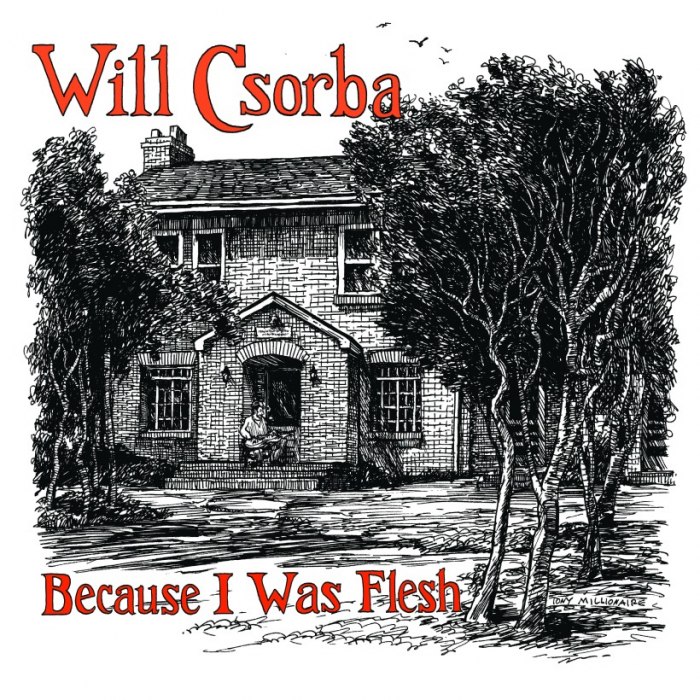 Will Csorba is a very prolific, young multiinstrumentalist from Houston, TX. He appeared in 2014 and is keeping himself and the community busy since then.

In his music you can hear the virtuosity, the signature picking patterns and historical references of guitarists like John Fahey, Jack Rose or Daniel Bachman.

Csorba absobs all those influences and produces tracks and projects constantly and he’s good at adapting all kind of styles and techniques. Here he quotes a classical music piece, there he draws inspiration from some obscure banjo player or he starts a folk improv or noise band with friends.

Also very Faheyesque: the poetic, descriptive track titles. Instead of calling them Complicated Picking Pattern No. 5, the titles give a reference to some of Csorba’s personal experiences that paint a picture behind your eyes (Impression of An Undiscovered Roadway). Citing the bible (For Judgment I Came Into The World (or, Dying Would Be Easy If Dying Was All)) and names of places (Bleiberville, TX) are also proofen standards in naming guitar instrumentals. I think this works pretty well with this kind of music and it might work as a diary for the artist. I like the idea to associate events or places with a musical theme.

After his debut The Bear Creek Child Cemetery I lost a bit track of Csorba’s activity – I listened to one or another piece that showed up on his channels (soundcloud, you tube). But with the amount of output I felt a bit overwhelmed withfollowing up.

Because I was flesh was the first time I listened to his music more closely again.
The album has some nice diversity and is ranging from darker, eastern music influenced numbers to more uplifting rags and country blues tracks. There is the obligatory Fahey cover and the inevitable Weissenborn lap steel section, which became some sort of a standard in the genre.

I think his songwriting got a bit more consistent and he finds back to a theme he started with. In his earlier work he tend to pack all the good ideas into one song and ended up with a 8 minute pieces that left me completely lost. The tendency is still there and I guess it has to do with the excitement to play this music.

Csorba is a very virtuose player and his focus is on syncopating and embellishing the heck out of a phrase or a melody. But sometimes he seems to stumble over his own complex patterns, which then sounds like a weird cut or a mistake. I found that confusing. But it only happened two or three times over the whole hour that the album last. I am not an expert and I take my hat off to everybody who gets more out of an guitar than three open chords.

This is a good album and you can tell how much work he put in it. I wish he would have focused more on the selection of songs. A playtime under an hour and reduction of complexity (says someone who can’t make a mix under two hours), but that’s just my two cents. A nice gimmick is that he embedded the songs into light field recordings with bird songs and outside noises.

Because I was flesh is available as download and as cd from Will Csorba’s bandcamp page. You’ll find a lot more music there, so go and check it out.

PS: Hey, the cover artwork blends in nicely. Red and black, I like it!