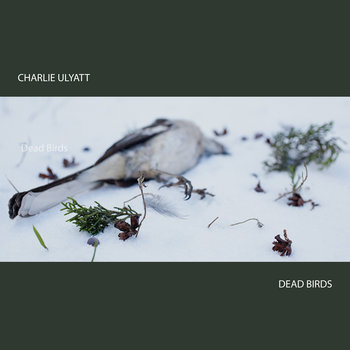 From We Need No Swords (https://weneednoswords.wordpress.com/2016/08/15/charlie-ulyatt-dead-birds/ )

These eight ruminative pieces from Nottingham guitarist Charlie Ulyatt demonstrate a rare cohesion and assurance, their slow progression opening up wide, meditative spaces that are both liberating and tinged with a sense of foreboding. Ulyatt’s sound – swathed in reverb with a hint of tremelo that leaves his picked notes shimmering in the air in a seemingly perpetual decay – recalls the cosmic guitar ragas of Dean McPhee. But whereas McPhee’s playing is rigorously idiom free, Ulyatt seems happier to let folkish intervals and the occasional post-rock inflected gesture creep into what he’s doing. There’s nowt bad about letting your influences shine through, of course, and these stylistic pointers bring light and shade to Ulyatt’s compositions, ranging from a Renbourn-style courtliness through to a gloomy near-goth glower.

If that welter of name-dropping makes Dead Birds sound like some postmodernist stew stylistic references, the reality couldn’t be further from the truth. The ghosts of other performers may tip toe around in the background but for the most part Ulyatt is perfectly in control here, paring everything back to a lyrical minimalism that rarely puts a plectrum wrong. On pieces like In the End, the notes don’t exactly tumble from Ulyatt’s instrument – instead he seems focused on playing as few notes as is humanly possible to convey his message, resulting in skeletal, folky forms that gleam like ancient bones, long picked clean by vultures, their bleached whiteness enigmatic markers in a parched landscape.

True, Dead Birds might sound a tad dour at times – the seven minutes of Like Dust When It Rains have a gloriously druidic aridity that conjure up the image of John Fahey working his way through Mogwai’s back catalogue, for example. Overall, however, the unhurried pace and glistening melodic dewdrops of Dead Birds make for a meditative and satisfying listen, the kind of thing you’d reach for during a long autumn afternoon with a pot of tea and a smoke. It’s hazy enough to loosen your grip on quotidian worries without opening up any troublesome wormholes in time and space. And even if the cover art’s a bit mournful – looks like Ulyatt’s pet moggie has gone hunting again – it would be difficult not to feel at the least moderately chilled out after half an hour or so in Dead Birds’ company.
........................................................................

Charlie Ulyatt is the very definition of an independent artist. Thanks (in no small part) to the exponential trajectory of technology, it has never been easier for someone to write, perform, record, produce, and distribute an album free of any concession to someone else's perspective, vision or bottom-line; something that Ulyatt himself has just accomplished. The Nottingham, UK based sonic-minimalist recently self-released Dead Birds, a defiantly introverted rumination of a record that he self-describes as the culmination of many years spent living in the wild and sparse flatlands of Lincolnshire.

Eschewing much of what you would typically associate with a solo instrumental/ambient release (electronics, loops, etc..), Dead Birds is an exercise in understated brevity; eight tracks of sparse, solo guitar that slowly unravel and reveal their themselves amid a backdrop of droning vamps and sparse chords. And yet, despite the minimalistic execution and admirably unprocessed guitar tone and production, the songs themselves are impressively cinematic in scope.

The album opens with the shimmering, almost chime-like guitar line of “Stealing Shelter”, a song that serves as an overture of sorts for what is to come. “Breathing Space” and “In the End” further explore this template, deliberately moving from one motif to another, seamlessly blending together.

The musical centerpiece of the album is the seven-minute-plus “Like Dust When it Rains”, a sparsely mournful epic that perfectly demonstrates Ulyatt’s commanding restraint. The backwards guitar-laden “Hanging Of the Light at Dawn” and the overdriven ambiance of the album closer “Losing Myself” confidently book-end an album that is cleverly tethered at all times to a persistently subtle melancholy.

While there is something to be said for the universal impact of sincere simplicity, ‘less is more’ is one of the more difficult and elusive musical axioms to actually implement. Rife with hard to quantify intangibles, when it comes to droning, ambient instrumental/electronic music, it’s a very fine line between genius and boring. To this point, Dead Birds is a resounding success; an absolute must listen for post-rock, prog-rock, ambient, instrumental and guitar fans alike.

" It is pouring rain and unseasonably cold here in Detroit this morning, so your rich ringing tones & fucking fantastic harmonics are echoing nicely through my space today. Top volume. Thank you for enhancing my gray morning!"

Charlie Ulyatt describes his album Dead Birds as ‘perhaps, the culmination of many years spent living in the wild and sparse flatlands of Lincolnshire. The bleak endless landscapes taking form in the sound of sustained minimal electric guitar.’ Fighting Boredom have been listening to it, have a read what we think below.

Charlie says that this music is the culmination of the years spent living in the wild and sparse flat lands of Lincolnshire. A landscape that has settled into the music and given it a natural wild feel. The song titles tell the story and the sound adds to them. The music has a sadness that echoes through the quietness. For example, ‘Breathing Space’ is measured; each sound comes after the other has faded away like footsteps across snow as the drifts wipe away what has come before. The feeling is of something in transit, moving, not staying the same.

The exception to the calm, controlled music is the burst of noise that is Dead Birds; from a blast of an ebow and words from a Greek poet about the flight of Icarus. It’s a jarring move as the album moves forward.

Towards the end of the album there is a more distorted guitar sound but the notes still circle around and build small delicate patterns inside your head.

Overall the pictures that are conjured up in my head are of rainfall on a sunny day, green rolling countryside intersected with hedgerow and interactions either between the elements or creatures.

It’s a fascinating glimpse into what one man gets from his environment and how that environment can translate into sound. Quite wonderful, understated and beautiful.

At a time when it's never been easier for independent recordings to be produced, solo guitar albums are appearing, it seems, with ever greater regularity, and these four recent ones testify to the genre's current robust level of health. Of the four, it's Charlie Ulyatt's that's the outlier, simply because it's a collection of solo electric guitar pieces in contrast to the acoustic focus of the others. The cryptically titled Dead Birds is the first album release by the Nottingham, UK guitarist and was recorded, so we're told, “in an old potato warehouse and mastered in the wilderness of the Outer Hebrides.” There's much to recommend about the recording. Ulyatt's not out to dazzle the listener with technical virtuosity; instead, he uses the instrument to evoke the vast rolling flatlands of Lincolnshire. Not every space is filled, either; he allows room for the guitar's ample sustain to emerge between the melodic expressions (never better exemplified than during “Breathing Space”), and each setting takes on the character of a story with a dusty folk tale to tell. On a representative track such as the meditative drone “Like Dust When it Rains,” he admirably resists the urge to squeeze a solo into available spaces, implicitly demonstrating in doing so confidence in the impact the composition will have when presented in its unembellished smolder. There's also an appealing, slow-burn quality to “Hanging of the Light at Dawn,” and on this otherwise instrumental collection, the title piece mixes things up in featuring a spoken word turn by the guitarist, with a Greek poet's musings on Icarus punctuated by a raw e-bow flourish. At eight tracks and thirty-six minutes, Dead Birds presents a concise and flattering portrait that's no less appealing for being free of flab.

"Over eight short tracks, Charlie Ulyatt’s guitar meditates on the musician’s time spent in Lincolnshire, with Dead Birds invoking the county’s vast flatlands and wild scenery. The album is sparse, often just Ulyatt’s guitar shimmering as if caught by the breeze, but it’s all the better for it. He could have easily overdone the guitar theatrics, but he’s kept it simple and raw; utilising tremolo, lush reverb, and plenty of space between the notes, making this an affective listen. It’s a record that echoes around your headspace and takes you to a calmer place, where the world moves at a slower pace. The mood gently shifts over the 34 minutes – Dead Birds features the words from a Greek poem and the final two tracks add some distorted vibrating guitar to the mix, but it never breaks its spell. With this album, Charlie Ulyatt has created an engaging and meditative listen". Paul Klotschkow - Left Lion

Dead Birds is, perhaps, the culmination of many years spent living in the wild and sparse flatlands of Lincolnshire. The bleak endless landscapes taking form in the sound of sustained minimal electric guitar. Despite this empty landscape, a warmth runs through the shimmering notes, slowly repeating and changing like a haunting yet unsettling nursery rhyme sonically told over wide open spaces.

Although an instrumental guitar album, the title track 'Dead Birds' contains the words of a Greek poet based on the story of Icarus, told as a political allegory through a short distorted ebow blast. 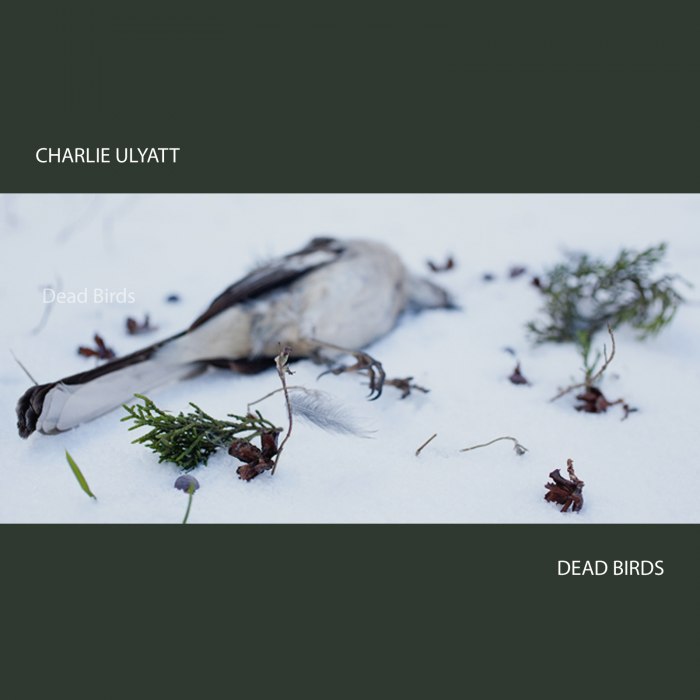 Neil Young's Dead Man soundtrack is the first that comes to my mind when I read that an album consists solely of an electric guitar. That's when I usually skipped to another album. But the latest release of Nick Jonah Davis and C Joynes "Split Electric" and musicians like William Tyler or Steve Gunn they all helped to qualify my opinion.

Charlie Ulyatt from Nottingham in the UK debuts with an album of mostly undistorted, amplified solo electric guitar pieces similar to Dean McPhee's music. Not as sophisticated as a guitar player but similar in working with the characteristics of guitar amps, sustain and effects.

In his own words:

Dead Birds is, perhaps, the culmination of many years spent living in the wild and sparse flatlands of Lincolnshire. The bleak endless landscapes taking form in the sustained minimal electric guitar of Charlie Ulyatt. Despite this empty landscape, a warmth runs through the shimmering notes, slowly repeating and changing like a haunting yet unsettling nursery rhyme sonically told over wide open spaces.

Although an instrumental guitar album, the title track 'Dead Birds' contains the words of a Greek poet based on the story of Icarus, told as a political allegory through a short distorted ebow blast.

Recorded in an old potato warehouse and mastered in the wilderness of the Outer Hebrides, Dead Birds feels like the start, and not the end, of an interesting journey across personal landscapes

The album is available on Charlie Ulyatt's bandcamp as cassette, cdr or download.