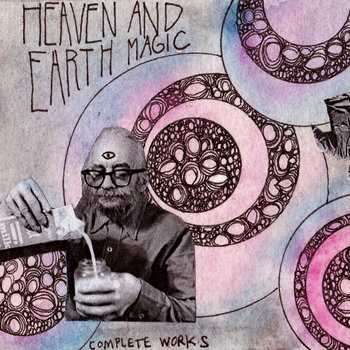 Tapes available from High Ledges Tapes for $6 plus shipping. 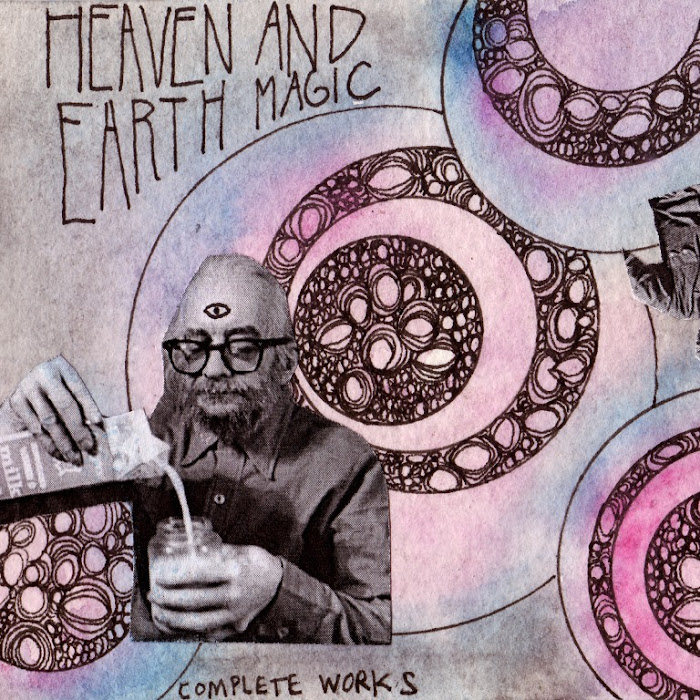 Anthony Pasquarosa plays a lot of music. He plays different kinds of music. Unamplified acoustic and very loud distorted music. Yet, he is the quietest, at least on the internet. No status updates about ripped strings, just occacionally a post, when there is a gig or a new release coming out.

Together with Zac Johnson and Ian Logan he recorded under the moniker Heaven And Earth Magic a tape for High Ledges Tapes. The name is borrowed from a really weird one hour long stop motion experimental film from the late fifties, by - you guess it from the cover artwork, Harry Smith.

The trio tries to explore kind of a sixties garage psych rock sound. Slow burning, drowned in reverb. It sounds like a weekend session to pin down ideas for that kind garage band thing. Since they are really good musicians they accomplish this task very well. Yet some songs sound kinda the same. But that's no problem. It is what it is and how Anthony and his friends, probably work.

But there was one track, that grabbed my attention and when I looked closer, it wasn't even their own song. They recorded a version of Uncle Dave Macon "Oh lovin' babe". I heard about Macon, a key figure of early country music, with a huge output, but I've never heard this particular song.

So the surprise, how the original banjo driven song translates into the bands psych rock sound was quiet huge and I wanted to find out more. The internet told me, that Heaven and Earth Magic used the slightly changed lyrics of Dudley Connell and Don Rigsby instead of Macon's original ones.

Regarding the lyrics: It looks like Uncle Dave Macon wasn't able to keep it in his pants when he was travelling and so he got kissed by a pretty, strange woman, because men cannot help themself in those cases. When his wife wants to leave him, he tries to make her guilty with the old story about the garden eden and eve and the apple she gave to adam. I might be wrong with my interpretation, please correct me. Macon also was more an entertainer than a preacher so he's probably not that serious about the bible and stuff.

Charles Wolfe noted: 'Oh Lovin' Babe is another song never before issued (Rounder issue 1979) and nowhere else recorded by Macon. The unusual melody for the song seems to have been adapted from the verse of 'Mister Johnson, Turn Me Loose', an old coon song written in the ragtime era by one B. Harney. Macon had recorded 'Mister Johnson' with Sid Harkreader in 1929 with the melody (but not the words) to the verse identical to what is heard here … The juxtaposing of the sacred (verse) with the profane (chorus), common enough in Macon's music overall, was seldom illustrated so dramatically in a single song'. (source)

This shows that Anthony, Zac and Ian, know their stuff and that makes this release so interesting. There is more than adapting a sound from an era. At least, the result of turning a banjo tune into this kind of sixties sound is pretty awesome. (I know that American folk music, country blues etc. are parts of the roots of rock'n'roll and american pop culture in general, so maybe this is just a direct example of how old time folk music tunes shines through modern rock music.)

I love exploring music and I am happy that they introduced me to this song by Uncle Dave Macon through their reverbed psych rock project.

If you don't know the original song, listen to Heaven and Earth Magic's version first and then to Macon's original.

And if you are from around New York, go see Anthony Pasquarosa playing next week at Union Pool, with my friend Zachary Cale, the mighty Michael Chapman and I am sure you can geek out about Fahey with Steve Lowenthal there. 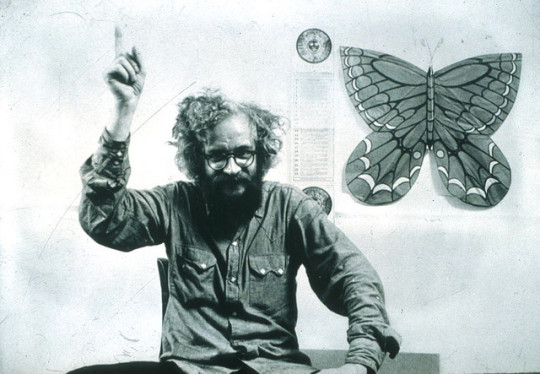